Just read this article, sent along by a friend.

Worth reading. But a few comments.

Scholars tend to place jihad groups into boxes, as noted in the first paragraph.

The terrain is a bit messier and chaotic.

Regarding Syria, other groups are in play and serve proxy roles for greater interests in the state.

These images are from 3 February. And it is the graduation ceremony for “The Free Men of the East” – First Legion, 123rd Brigade which is regionally active in Syria. 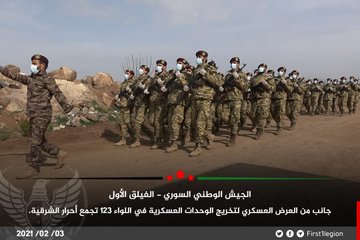 Regarding Shamil Basayev – I purchased his “Book of Jihad” from a Chechen web portal many years ago.

Abu Muhammad al Maqdisi? He is a reformed man. Or so we are told.

But I like to remember a small fact. Al Maqdisi was one of two men thanked for their influential writings in the Shaheed witness penned by the Camp Chapman suicide bomber prior to his death.